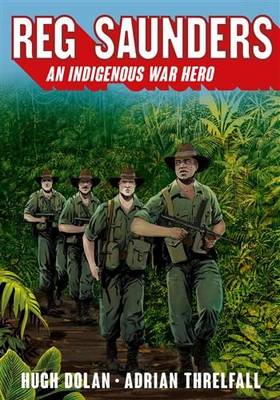 The little-known story of Reg Saunders, the first Indigenous Australian to become an officer in the Army, retold in action-packed graphic format. Reg Saunders MBE (1920-90) not only survived the World War II battlefields in the Middle East, North Africa, Greece, Crete and New Guinea, but excelled as a military leader. He was recommended for officer training and, in 1944, returned to New Guinea as a platoon commander - the first Aboriginal Australian to serve as a commissioned officer. What happened during the war to transform a determined young man from country Victoria into a war hero - one who would go on to serve with distinction in the Korean War, and become a pioneering figure for Indigenous rights?

'Reg Saunders immortalised in comic, An Indigenous War Hero,' featured in The Age

» Have you read this book? We'd like to know what you think about it - write a review about Reg Saunders book by Hugh Dolan and you'll earn 50c in Boomerang Bucks loyalty dollars (you must be a Boomerang Books Account Holder - it's free to sign up and there are great benefits!)

Hugh Dolan is a former intelligence officer with the Royal Australian Air Force. He is the author of 36 Days: The Untold Story Behind the Gallipoli Landings (2010), presenter of the documentary Gallipoli From Above and general military historian-at-large.Adrian Threlfall is a lecturer in history at Victoria University, Melbourne, Australia and a member of the education team at the Shrine of Remembrance, Victoria. He is also a former infantryman in theAustralian Army Reserve.