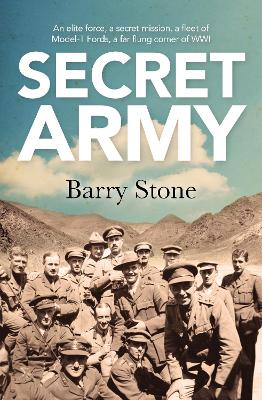 An Elite Force, A Secret Mission, A Fleet Of Model-T Fords, A Far Flung Corner Of WWI Main

It was arguably the greatest fighting force in the entirety of the Great War. They were the very best: hardened, fearless, decorated, cocky fighting men, all veterans of Gallipoli and the Western Front. Yet this elite force secretly assembled in London in late 1917 remains an enigma even today.

Barry Stone tells the story of these Australian, British, New Zealand, Canadian and South African men who were sent to the ethnic powder keg of the Caucasus to preserve British interests. They matched wits with German spies and assassins. They fought the Turks. They dined with sheiks, outraged local mullahs, forged unlikely alliances with Russian Cossacks, helped Armenians flee genocide, and saved the lives of thousands of starving Persians.

This book is a rarity: a story set against the backdrop of war, filled not with bloodshed but with acts of kindness and selflessness; a triumph of the human spirit. 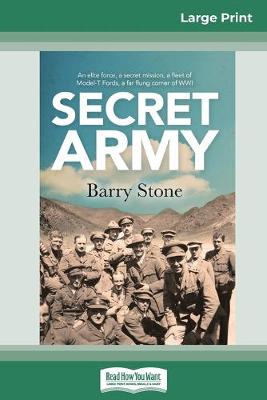 » Have you read this book? We'd like to know what you think about it - write a review about Secret Army book by Barry Stone and you'll earn 50c in Boomerang Bucks loyalty dollars (you must be a Boomerang Books Account Holder - it's free to sign up and there are great benefits!)

Barry Stone is a journalist and travel writer. He is author of The Desert Anzacs and The Digger's Menagerie, and has written on topics as varied as mutinies in the age of sail, and a history of hermits and recluses.

A Preview for this title is currently not available.
More Books By Barry Stone
View All