The Secret History of the Blitz

Description - The Secret History of the Blitz by Joshua Levine

The Blitz of 1940-41 is one of the most iconic periods in modern British history - and one of the most misunderstood. The 'Blitz spirit' is celebrated by some, whereas others dismiss it as a myth. Joshua Levine's thrilling biography rejects the tired arguments and reveals the human truth: the Blitz was a time of extremes of experience and behaviour. People werepulling together and helping strangers, but they were also breaking rules and exploiting each other. Life during wartime, the author reveals, was complex and messy and real.

From the first page readers will discover a different story to the one they thought they knew - from the sacrifices made by ordinary people to a sudden surge in the popularity of nightclubs; from secret criminal trials at the Old Bailey to a Columbine-style murder in an Oxford college. There were new working opportunities for women and the appearance of unfamiliar cultures: whilst prayers were offered up in a south London mosque, Jamaican sailors were struggling to cross the country.Unlikely friendships were fostered and surprising sexualities explored - these years saw a boom in prostitution and even the emergence of a popular weekly magazine for fetishists. On the darker side, racketeers and spivs made money out of the chaos, and looters prowled the night to prey on bomb victims.

From the lack of cheese to the decreased suicide rate, this astonishing and entertaining book takes the true pulse of a 'blitzed nation'. And it shows how social change during this time led to political change - which in turn has built the Britain we know today.

Other Editions - The Secret History of the Blitz by Joshua Levine 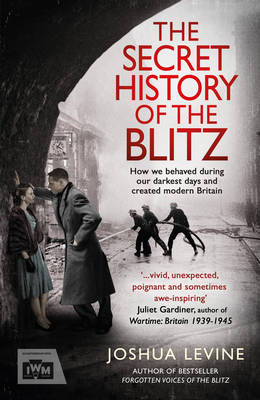 Book Reviews - The Secret History of the Blitz by Joshua Levine

» Have you read this book? We'd like to know what you think about it - write a review about Secret History of the Blitz book by Joshua Levine and you'll earn 50c in Boomerang Bucks loyalty dollars (you must be a Boomerang Books Account Holder - it's free to sign up and there are great benefits!)

Joshua Levine has written six bestselling histories including titles in the hugely popular 'Forgotten Voices' series published by Ebury. Beauty and Atrocity, his account of the Irish Troubles, was nominated for the Writers' Guild Book of the Year award. On a Wing and a Prayer, his history of the pilots of the First World War, has been turned into a major British television documentary. He has written and presented a number of programmes for BBC Radio 4. In a previous life, he was a criminal barrister. He lives in London.