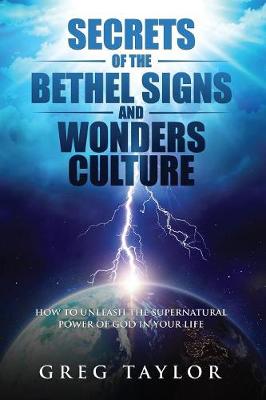 Secrets of the Bethel Signs and Wonders Culture: How to Unleash the Supernatural Power of God in Your Life

Description - Secrets of the Bethel Signs and Wonders Culture: How to Unleash the Supernatural Power of God in Your Life by Greg Taylor

Over the last two decades, Bethel Church in Redding, California, has risen to prominence in the area of signs and wonders ministry. The kinds of miracles seen in the ministries of Jesus and the New Testament Church are manifesting, not only through Bethel's leadership team (e.g. Bill Johnson and Kris Vallotton), but also ordinary, everyday people - both within the church, and to an even greater extent outside of its four walls. For example, the blind are receiving their sight, the deaf hearing, and many "incurable diseases" are being cured. Furthermore, every major sphere of society, including government and politics, business, education, the arts and entertainment, and popular culture, is being impacted for the Kingdom, through the power of God.

When former professional researcher Greg Taylor went to Bethel Church to study at its ministry school (the Bethel School of Supernatural Ministry), he became curious as to why they are so successful at seeing the supernatural manifest, compared to most other churches - in things like healing and prophecy. And after considering this question, he quickly realized that it isn't due to anything special about either the church's physical location or any of its people. What he discovered was that the decisive factor, instead, is Bethel's signs and wonders culture.

This then led to him investigating the culture, to try to determine what is so special about it. Following months of analysis, both experientially as a BSSM student and through the detailed research of many of their published materials, he came to the conclusion that there are only really 10 key components of it, which can all be learned quickly and easily.

In this book, Greg reveals these 10 "secrets" of Bethel's signs and wonders culture, and explains in great detail how you can use them to create your own similar culture, and thereby unleash the supernatural power of God in your life too.

Buy Secrets of the Bethel Signs and Wonders Culture: How to Unleash the Supernatural Power of God in Your Life by Greg Taylor from Australia's Online Independent Bookstore, Boomerang Books.

Book Reviews - Secrets of the Bethel Signs and Wonders Culture: How to Unleash the Supernatural Power of God in Your Life by Greg Taylor

» Have you read this book? We'd like to know what you think about it - write a review about Secrets of the Bethel Signs and Wonders Culture: How to Unleash the Supernatural Power of God in Your Life book by Greg Taylor and you'll earn 50c in Boomerang Bucks loyalty dollars (you must be a Boomerang Books Account Holder - it's free to sign up and there are great benefits!)


A Preview for this title is currently not available.
More Books By Greg Taylor
View All