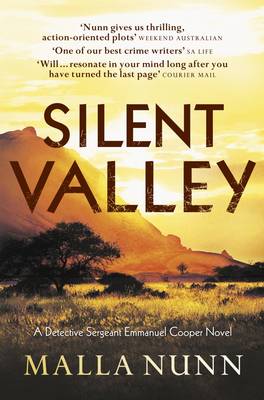 A remote town. A girl of rare and exquisite beauty. A murder that silences a whole community. The body of a seventeen-year-old girl has been found covered in wildflowers on a hillside in the Drakensberg Mountains, near Durban. She is the daughter of a Zulu chief, destined to fetch a high bride price. Was Amahle as innocent as her family claims, or is her murder a sign that she lived a secret life? Detective Sergeant Emmanuel Cooper is sent to investigate. He must enter the guarded worlds of a traditional Zulu clan and a white farming community to gather up the clues Amahle left behind and bring her murderer to justice. But the silence in the valley is deafening, and it seems that everyone - from the uncooperative local police officer, to the white farm boy who seems obsessed with the dead girl - has something to hide. With no cause of death and no motive, Cooper's investigation is blocked at each turn. Can he tough it out, or will the small-town politics that stir up his feelings about the past be more than he can bear? In this page-turning tale of murder and mystery, Nunn entangles us in a rich and complex web of witchcraft, tribalism, taboo relationships...and plain old-fashioned greed.

» Have you read this book? We'd like to know what you think about it - write a review about Silent Valley book by Malla Nunn and you'll earn 50c in Boomerang Bucks loyalty dollars (you must be a Boomerang Books Account Holder - it's free to sign up and there are great benefits!)

After finishing Let The Dead Lie I was eager to dive into Silent Valley, the third installment of Malla Nunn's Detective Emmanuel Copper series set in Southern Africa in the 1950's. Silent Valley picks up a short time after Let The Dead Lie ends with Emmanuel on his first real case since being reinstated to the force. Along with Native Constable Samuel Shabalala, Colonel van Niekerk has sent Emmanuel to a small rural town where a homicide has been reported, what they find is the posed body of a dead Zulu girl, the daughter of a local cheiftan, with no visible signs of injury. Though under orders to wrap the investigation quickly and return to Durban, solving the murder is proving to be difficult being as it is complicated by a lazy local cop, a corrupt station owner, an arrogant chief and a reluctant doctor. Finding Mr Insurance Policy might just crack the case wide open, but things are never quite that simple for Detective Emmanuel Cooper.

The plotting of Silent Valley is superb, there are numerous twists and turns that kept me guessing almost the entire way through the novel. Emmanuel and Shabalala have to use every bit of their combined knowledge and skills to find the murderer and, as usual, Emmanuel can't help but step on a few toes in the process. He puts the town's Constable offside almost immediately by questioning his competence, while a powerful white local family, the son of whom is a suspect, wants the whole matter quashed and pulls strings within the CID to place pressure on Emmanuel. It seems that everyone is this community has secrets that would prefer remain hidden and none take kindly to Emmanuel investigating them. Emmanuel is not willing to give up though and continues to follow leads even those that seem to pull him in opposite directions. I really liked the way Shabalala's unique skills are brought the the fore in Silent Valley. The Zulu culture is an important feature of the story and as a Shangaan Zulu, Shabalala helps interpret the beliefs and motives of the local Zulu tribe. His tracking and keen observation abilities are also integral to Emmanuel considering and dismissing suspects and Shabalala gains more confidence in his partnership with Emmanuel in this more familiar setting. It is Colonel Van Niekerk that insists on the involvement of Dr Zweigman in the case when the local medic, Dr Helen Dagliesh proves reluctant to assist with determining the cause of the girl's death. The three men, Emmanuel, Shabalala and the Doctor, are a formidable team as always, but on this case, their refusal to back down results in a life threatening injury to the 'old Jew'.

While solving the murder of Amahle remains the central focus of the novel, Nunn continues to explore the culture of Southern Africa in the 1950's. The stark realities of Apartheid are ever present and Nunn also explores the conflict between white Afrikaners and the English. Tribalism and witchcraft also play a part as the investigation involves a local Zulu tribe.

Silent Valley is my favourite of this high quality crime series so far and leaves me eager for the next. With intelligent writing, intriguing story and appealing characters, the Detective Emmanuel series should be on everybody's reading list.

Malla Nunn grew up in Swaziland before moving with her parents to Perth in the 1970s. She attended uni in WA, and then the US. In New York, she worked on film sets, wrote her first screenplay before returning to Australia where she began writing and directing short films and corporate videos, three of which have won numerous awards and have been shown at international film festivals. Her debut novel A Beautiful Place to Die was published to international acclaim and won the 2009 Sisters in Crime Davitt Award for Best Adult Crime Novel by an Australian female author. Malla and her husband live in Sydney with their two children.