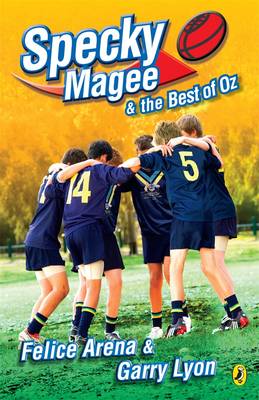 Specky Magee And The Best Of Oz

Description - Specky Magee And The Best Of Oz by Felice Arena

THE CROWD ROARED AS THE BALL ROCKETED INTO THE BACK OF THE NET.

SPECKY COLLAPSED ON THE GROUND FEELING USELESS AND HUMILIATED.

HE HAD NEVER FELT SO OUT OF HIS DEPTH ON A SPORTING FIELD . . .

Specky has been selected to represent Australia in International Rules, taking on the Irish in a two-test competition in Ireland. Can the boys learn to play with a new set of rules and perfect their skills with the round ball before the Irish team wipes the field with them? And is someone trying to sabotage the Aussie team's chances of winning? The pressure is on, and to make matters worse Specky has some serious decisions to make about his future before he returns home . . .

This trip to Ireland is no holiday and Specky will have to dig deep to face the biggest challenge of his life!

I wish Specky would hurry up and get drafted.
The Tigers would love to have him . . .
Matthew Richardson

» Have you read this book? We'd like to know what you think about it - write a review about Specky Magee And The Best Of Oz book by Felice Arena and you'll earn 50c in Boomerang Bucks loyalty dollars (you must be a Boomerang Books Account Holder - it's free to sign up and there are great benefits!)

Garry Lyon debuted with the Melbourne Football Club in 1986, at 18 years of age. He retired 14 years later with Best and Fairest and Leading Goal Kicker awards, Victorian and All Australian selections, and 226 games under his belt. He captained the Demons for seven years, as well as Victoria, and coached the Australian International Rules Team for four years. He is now a football columnist for The Age, commentator for Triple M and the host of Channel 9's football programs The Footy Show and Footy Classified.

Specky Magee And A Legend In The Making
Felice Arena
$14.44 $16.99
More Books By Felice Arena
View All