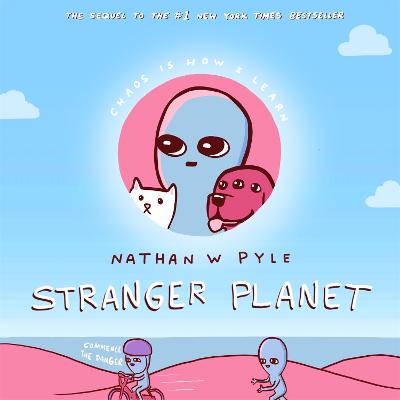 Stranger Planet: The Hilarious Sequel to the #1 Bestseller

Description - Stranger Planet: The Hilarious Sequel to the #1 Bestseller by Nathan W. Pyle

The sequel to the #1 New York Times bestselling phenomenon STRANGE PLANET, featuring more hilarious and poignant adventures from the fascinating inhabitants of Nathan W. Pyle's colourful world.In this eagerly awaited sequel, Nathan takes us back to his charming and instantly recognisable planet coloured in bright pinks, blues, greens, and purples, providing more escapades, jokes and p h r a s e s.Nathan mixes his most popular Instagram comics with more than thirty original works created exclusively for this second volume to explore four major topics: traditions, nature, emotions, and knowledge. He inducts new and longtime fans into a strangely familiar world and its culture, from "cohesion" (marriage) to "mild poison" (alcohol) to the full lyrics to "The Small Eight-Legged Creature" (sung to the tune of The Itsy Bitsy Spider).Bright, colourful, and whimsical - yet charmingly familiar - STRANGER PLANET is out-of-this-world fun.

» Have you read this book? We'd like to know what you think about it - write a review about Stranger Planet: The Hilarious Sequel to the #1 Bestseller book by Nathan W. Pyle and you'll earn 50c in Boomerang Bucks loyalty dollars (you must be a Boomerang Books Account Holder - it's free to sign up and there are great benefits!)

Before the Coffee Gets Cold
Toshikazu Kawaguchi
$15.19 $18.99
More Books By Nathan W. Pyle
View All