Homosexual Love in the Nineteenth Century

The nineteenth century was a golden age for those people known variously as sodomites, Uranians, monosexuals, and homosexuals. Long before Stonewall and Gay Pride, there was such a thing as gay culture, and it was recognized throughout Europe and America. Graham Robb, brilliant biographer of Balzac, Hugo, and Rimbaud, examines how homosexuals were treated by society and finds a tale of surprising tolerance. He describes the lives of gay men and women: how they discovered their sexuality and accepted or disguised it; how they came out; how they made contact with like-minded people. He also includes a fascinating investigation of the encrypted homosexuality of such famous nineteenth-century sleuths as Edgar Allan Poe's Auguste Dupin and Sherlock Holmes himself (with glances forward in time to Batman and J. Edgar Hoover). Finally, Strangers addresses crucial questions of gay culture, including the riddle of its relationship to religion: Why were homosexuals created with feelings that the Creator supposedly condemns? This is a landmark work, full of tolerant wisdom, fresh research, and surprises.

Other Editions - Strangers by Graham Robb 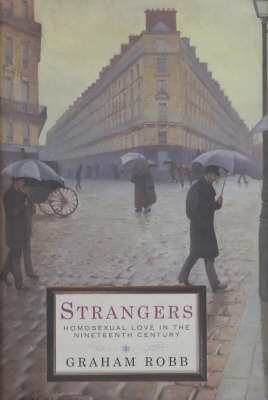 » Have you read this book? We'd like to know what you think about it - write a review about Strangers book by Graham Robb and you'll earn 50c in Boomerang Bucks loyalty dollars (you must be a Boomerang Books Account Holder - it's free to sign up and there are great benefits!)