Description - Sunglasses After Dark by Nancy A. Collins

A half-human, half-vampire hunts the bloodsucker who bit her in this "compelling" Bram Stoker Award-winning debut (Publishers Weekly).

One spring night in London, heiress Denise Thorne disappears while partying at a nightclub, never to be seen again. That very same night, Sonja Blue, a tough-as-nails punk vampire/vampire-slayer, conceived in terror and blood, is borne from the city's gutters. Saved by modern medicine before she could die, she is a living vampire who still possesses a soul and is determined to fight for what remains of her humanity. In the years since her bizarre resurrection, Sonja Blue travels the globe, hunting down and disposing of those creatures that prey on the innocent while searching for the vampire Noble who created her. But when she investigates a sleazy televangelist named Catherine Wheele, who is exploiting Denise Thorne's parents, Sonja finds herself up against a powerful inhuman adversary. But as dangerous as Catherine Wheele proves to be, Sonja's greatest foe remains the Other, the demonic personality with whom she is locked in a constant battle for control of their shared body. Can Sonja Blue overcome her inner demon in time to rescue an innocent man from Catherine Wheele's unholy clutches?

Acknowledged as one of the first Urban Fantasy novels, Sunglasses After Dark burst onto the fantasy/horror scene in 1989, garnering widespread critical praise and winning the Horror Writers Association's coveted Bram Stoker Award, as well as the British Fantasy Society's Icarus Award.

New edition: Revised and edited by the author.


Other Editions - Sunglasses After Dark by Nancy A. Collins 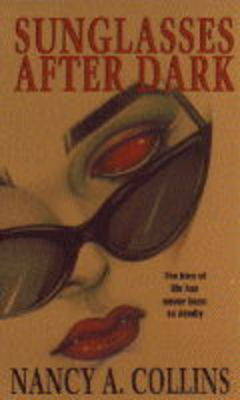 Book Reviews - Sunglasses After Dark by Nancy A. Collins

» Have you read this book? We'd like to know what you think about it - write a review about Sunglasses After Dark book by Nancy A. Collins and you'll earn 50c in Boomerang Bucks loyalty dollars (you must be a Boomerang Books Account Holder - it's free to sign up and there are great benefits!)

Nancy A. Collins has authored more than 20 novels and novellas and numerous short stories. She has also worked on several comic books, including a 2-year run on the Swamp Thing series. She is a recipient of the Bram Stoker Award and the British Fantasy Award, and has been nominated for the Eisner, John W. Campbell Memorial, and International Horror Guild Awards. Best known for her groundbreaking vampire series Sonja Blue, which heralded the rise of the popular urban fantasy genre, Collins is the author of the bestselling Sunglasses After Dark, the Southern Gothic collection Knuckles and Tales, and the Vamps series for young adults. Her most recent novel is Left Hand Magic, the second installment in the critically acclaimed Golgotham urban fantasy series. She currently resides in Norfolk, Virginia, with a Boston terrier.