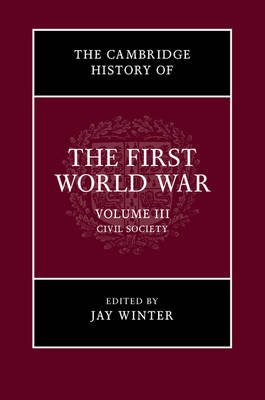 The The Cambridge History of the First World War: Volume 3, Civil Society

Description - The The Cambridge History of the First World War: Volume 3, Civil Society by Jay Winter

Volume 3 of The Cambridge History of the First World War explores the social and cultural history of the war and considers the role of civil society throughout the conflict; that is to say those institutions and practices outside the state through which the war effort was waged. Drawing on 25 years of historical scholarship, it sheds new light on culturally significant issues such as how families and medical authorities adapted to the challenges of war and the shift that occurred in gender roles and behaviour that would subsequently reshape society. Adopting a transnational approach, this volume surveys the war's treatment of populations at risk, including refugees, minorities and internees, to show the full extent of the disaster of war and, with it, the stubborn survival of irrational kindness and the generosity of spirit that persisted amidst the bitterness at the heart of warfare, with all its contradictions and enduring legacies.

» Have you read this book? We'd like to know what you think about it - write a review about The Cambridge History of the First World War: Volume 3, Civil Society book by Jay Winter and you'll earn 50c in Boomerang Bucks loyalty dollars (you must be a Boomerang Books Account Holder - it's free to sign up and there are great benefits!)