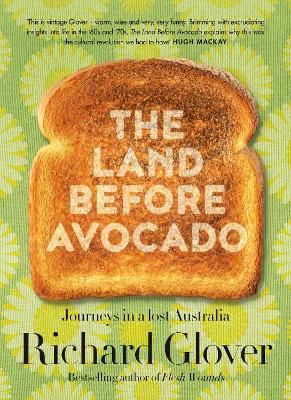 The Land Before Avocado

Description - The Land Before Avocado by Richard Glover

The new book from the bestselling author of Flesh Wounds. A funny and frank look at the way Australia used to be - and just how far we have come.

'It was simpler time'. We had more fun back then'. 'Everyone could afford a house'.

There's plenty of nostalgia right now for the Australia of the past, but what was it really like?

In The Land Before Avocado, Richard Glover takes a journey to an almost unrecognisable Australia. It's a vivid portrait of a quite peculiar land: a place that is scary and weird, dangerous and incomprehensible, and, now and then, surprisingly appealing.

Let's break the news now: they didn't have avocado.

It's a place of funny clothing and food that was appalling, but amusingly so. It is also the land of staggeringly awful attitudes - often enshrined in law - towards anybody who didn't fit in.

The Land Before Avocado will make you laugh and cry, feel angry and inspired. And leave you wondering how bizarre things were, not so long ago.

Most of all, it will make you realise how far we've come - and how much further we can go.

Richard Glover's just-published The Land Before Avocado is a wonderful and witty journey back in time to life in the early 1970s. For a start, he deftly reclaims the book's title fruit from those who have positioned it as a proxy for all that is wrong with today's supposedly feckless and spendthrift young adults. Rather than maligning the avocado (and young people), he cleverly appropriates the fruit as an exemplar of how far we have come since the 1970s' Richard Wakelin, Australian Financial Review

'This is vintage Glover - warm, wise and very, very funny. Brimming with excruciating insights into life in the late sixties and early seventies, The Land Before Avocado explains why this was the cultural revolution we had to have' Hugh Mackay

'Hilarious and horrifying, this is the ultimate intergenerational conversation starter' Annabel Crabb

Other Editions - The Land Before Avocado by Richard Glover 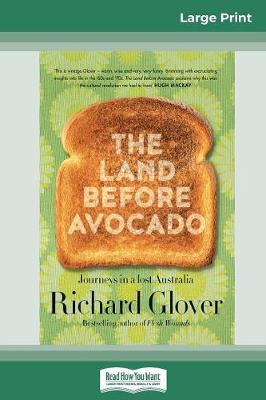 Book Reviews - The Land Before Avocado by Richard Glover

» Have you read this book? We'd like to know what you think about it - write a review about The Land Before Avocado book by Richard Glover and you'll earn 50c in Boomerang Bucks loyalty dollars (you must be a Boomerang Books Account Holder - it's free to sign up and there are great benefits!)

Book Review: The Land Before Avocado by Richard Glover - Reviewed by CloggieA (10 Jun 2019)

The Land Before Avocado is a book by Australian radio presenter and best-selling author, Richard Glover. In it he explores life in Australia during the time in which he grew up, the mid-sixties through to the mid-seventies. He explains that recent conversations with incredulous millennials about things both common and rare during that time led him to research the accuracy of his memories.

He starts with a clever little warning in the Smart Traveller website style which neatly summarises the land before avocado. And then he goes into detail. He “surfs the sea of happy nostalgia” but wonders if it was really all so great. Apparently, older Australians are particularly likely to say the past was paradise, but maybe that’s because they themselves were then younger, fitter, more attractive, with knees that didn’t creak.

There's plenty in this book that will raise millennial eye brows and stimulate their scepticism, not the least of which being parenting and teaching philosophies that relied on corporal punishment, and the illegality of outdoor tables at cafes. Meanwhile, readers over fifty sagely nod in agreement that yes, they remember it well (if not always fondly), and mentally add their own experiences.

In telling us what there was and wasn’t in the land before avocado, Glover cites many examples about food, clothing, leisure activities, cost of living, and transport, and details some of the hilarious aspects of life in those years. In fact, he lists fifteen things worth reclaiming from the 70s, and many of that vintage will agree.

But, lest we “indulge in deluded nostalgia” Glover also reminds us of the downside: the horrendous road carnage, archaic divorce laws, gender inequality, censorship, alcohol laws that virtually encouraged drink driving and binge drinking, people smoking everywhere, and an attitude to believing adults over children that gave paedophiles free reign. Certainly, if you were homosexual, Aboriginal, a migrant or Catholic, the late 60’s/early 70’s wasn’t such a brilliant place to live.

Glover challenges the belief that things are getting worse, more difficult, and more violent with hard facts, and he ends on a very optimistic note. But this book should definitely come with a warning: Do Not Read This Book whilst consuming food or drink, whilst travelling in the quiet carriage on public transport (as your guffaws may disturb other travellers), and, for readers of a certain vintage, with a full bladder. A hugely entertaining read.

Herbert Stanley Jenkins, Medical Missionary, Shensi, China: With Some Notices of the Work of the Baptist Missionary Society in That Country
$88.06 $97.84

Medea. a Tragedy. by Mr. Glover. Adapted for Theatrical Representation, as Performed at the Theatre-Royal, Drury-Lane. Regulated from the Prompt-Book, ...
$39.12 $43.47

Alexandra Park Prize Essays. Essays on the Capabilities and Development of the Alexandra Park. by R. G., and M. A. Morel. with Selections from Other Essays Received by the Committee. Edited by B. Ringrose
$43.53 $48.37

Medea. a Tragedy, by Mr. Glover. Adapted for Theatrical Representation, as Performed at the Theatre-Royal, Drury-Lane. Regulated from the Prompt-Book, by Permission of the Manager. ...
$41.33 $45.92