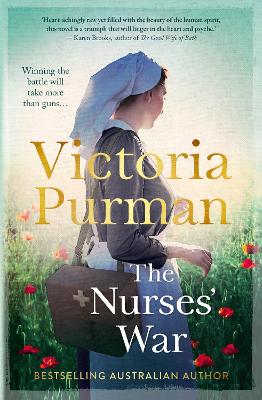 There is more than one way to fight a war...An extraordinary story of grit, love and loss, based on the true history and real experiences of Australian nurses in World War 1.


'Heart-achingly raw yet filled with the beauty of the human spirit, this novel is a triumph that will linger in the heart and psyche.' Karen Brooks, author of The Good Wife of Bath

In 1915, as World War 1 rages in Europe and the numbers of dead and injured continue to grow, Australian nurse, Sister Cora Barker, leaves her home in Australia for England, determined to use her skills for King and country. When she arrives at Harefield House - donated to the Australian Army by its expatriate Australian owners - she helps transform it into a hospital that is also a little piece of home for recuperating Australian soldiers.

As the months pass, her mission to save diggers lives becomes more urgent as the darkest months of the war see injured soldiers from the battlefields of France and Belgium flood into Harefield in the thousands. When the hospital sends out a desperate call for help, a quiet young seamstress from the village, Jessie Chester, steps up as a volunteer. At the hospital she meets Private Bert Mott, a recovering Australian soldier, but the looming threat of his return to the Front hangs over them. Could her first love be her first heartbreak?

Cora's and Jessie's futures, their hearts and their lives hang in the balance as the never-ending wave of injured and dying soldiers threatens to overwhelm the hospital and the hopes of a nation rest on a knife edge. The nurses war is a war against despair and death, fought with science and love rather than mustard gas and fear - but can they possibly win it? And what will be the cost?

» Have you read this book? We'd like to know what you think about it - write a review about The Nurses' War book by Victoria Purman and you'll earn 50c in Boomerang Bucks loyalty dollars (you must be a Boomerang Books Account Holder - it's free to sign up and there are great benefits!)

4.5★s “The war had changed the way everyone thought of what was proper and normal. She had held the hands of more soldiers than she could count. She had flirted with her boys in the full knowledge that she meant nothing by it, and they took nothing from it but, for those few moments, they believed themselves to be men again, which doubt and injury and cruel circumstance had robbed from them.”

The Burses’ War is the eleventh novel by best-selling Australian author, Victoria Purman. In early 1915, thirty-one-year-old nurse Cora Barker joins three other nurses on a ship to England. Single, and with fourteen years’ experience, she has decided to do her bit for the war effort. The nurses are headed for Middlesex, to the village of Harefield, where an Australian heiress and her family have offered up their estate as a hospital for injured Australian Army recruits.

Cora, Gertie, Leonora and Fiona, under the watchful eye of Matron Ethel Gray, are there at the start to convert the mansion and grounds into the Number One Australian Auxiliary Hospital AIF, which is intended to accommodate sixty men in winter and one hundred and fifty in summer. They are initially helped by volunteers Jessie Chester and her mother, Win, seamstresses from the village; later doctors, porters and administrative staff join the team.

And then the patients arrive, men from the battles at Gallipoli and, later, Western European theatres of war, men who need to be repaired for return to fighting, or repatriation, if no longer fit to fight. Despite their experience in Australian hospitals, none of the nurses is psychologically prepared for the sorts of injuries that present.

The numbers they are expected to treat quickly expand well beyond the predicted, ensuring that they have virtually no downtime, and are soon plagued by exhaustion, insomnia and, with no respite, Nurses’ Back.

With more medical staff, they are eventually treating over a thousand men at a time, with only a very small number of patients lost, but the relentless pace means that the soldiers are not the only ones with battle fatigue and what will later be called post-traumatic stress. “War weary. Battle scarred. Exhausted in both mind and body.”

Told through the twin narratives of Cora and Jessie, the novel gives the perspective of a visitor and a local; supplementing this is correspondence between Cora and her family in South Australia, between Jessie and her Australian fiancé serving in France and between Jessie and Army officialdom.

The story takes place over some six years and moves at a fairly sedate pace that allows the reader to slowly form attachments to the main characters, to understand and empathise with what they experience and endure: friendship, romance, grief and loss.

When she includes village gossip and women stepping into the roles normally reserved for men, Purman illustrates the stark differences between the relaxed attitude of the Australians and their more conservative British hosts.

Her depiction of sexual, class and racial discrimination feels authentic and the depth of Purman’s research is apparent on every page. With liberal use of popular culture references, Purman easily conveys both the era and the setting in this moving and interesting piece of historical fiction. This unbiased review is from an uncorrected proof copy provided by NetGalley and Harlequin Australia.


A Preview for this title is currently not available.
More Books By Victoria Purman
View All