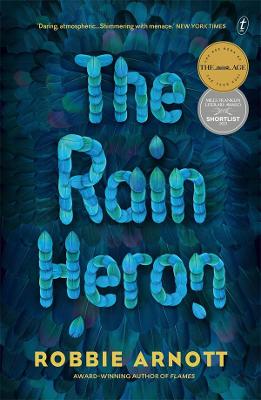 From a 2019 Sydney Morning Herald Young Novelist of the Year and the author of the highly praised novel Flames, comes another beguiling, transformative work of fiction confirming Robbie Arnott as one of Australia's most exciting writers.

Ren lives alone on the remote frontier of a country devastated by a coup. High on the forested slopes, she survives by hunting and trading-and forgetting.

But when a young soldier comes to the mountains in search of a local myth, Ren is inexorably drawn into her
impossible mission.

As their lives entwine, unravel and erupt-as myths merge with reality-both Ren and the soldier are forced to confront what they regret, what they love, and what they fear.

» Have you read this book? We'd like to know what you think about it - write a review about The Rain Heron book by Robbie Arnott and you'll earn 50c in Boomerang Bucks loyalty dollars (you must be a Boomerang Books Account Holder - it's free to sign up and there are great benefits!)

Book Review: The Rain Heron by Robbie Arnott - Reviewed by CloggieA (18 May 2020)

5 stars “Above her the sky was dark and clear, a navy sheet shot through with stars, and with fuzzy clarity she remembered that she loved the mountain. The scrubbed, endless sky; the sweet-clearing scent; the tossing wind and the bending trees and the high peaks and the running, freezing glassiness of the streams.”

The Rain Heron is the second novel by award-winning Australian author, Robbie Arnott. In their youth, the children of this country hear the story of the rain heron. They learn that the rain heron is “associated with rainfall, abundance and harvests, but also with floods and destruction, sometimes death.” When they grow up, they realise, of course, that it’s only a fairy tale. Unless they saw it for themselves.

“Its blue-grey feathers were so pale, they claimed later, that they could see straight through the bird. Its body was pierced by strands of dusky light, and the tree was clearly visible directly behind its sharp, moist beak.”

Barlow has warned Ren that soldiers are coming to the mountain, her place of refuge for five years now. She keeps a low profile, tries to stay under their radar; but when the moment arrives, she knows what they want and, gradually, she understands that her defiance is futile against their concerted campaign of methodical disintegration of resistance.

Medic Daniel resented being drafted into the army from medical school, unaware he had been chosen for his capacity for kindness, but feels a fierce loyalty to his squad, particularly their leader, Lieutenant Harkness. “She was cold, yes, but she was also smart and merciful and, with one recent notable exception, nonviolent.”

Her “uncanny nous for strategy, her nose for manipulation. She had moulded them into ambushers, infiltrators, outflankers. By the end of the coup they were primarily being used for shadow missions, spilling little blood but achieving significant victories. Minimal fuss or collateral damage.”

Their latest action, though, he questions: the reasons, their methods, and casualties and the ultimate results. “The generals want it because they heard it existed, and they’re in charge. Maybe they think it will make them look powerful.” The world is already in upheaval. What have they planned for this magical creature?

Arnott’s second novel is part-myth with a hint of paranormal, part-admonitory tale, set in a credible dystopia, mere steps from today’s world, where some rationalise questionable behaviour as following orders or simply by entitlement. The inclusion of the symbiotic squid ink harvest is a fascinating touch. Arnott gives the reader gorgeous prose, rich and lyrical; this and the quality of story itself will likely forgive the lack of speech marks for most readers. Utterly mesmerising. This unbiased review is from an uncorrected proof copy provided by NetGalley and Text Publishing.