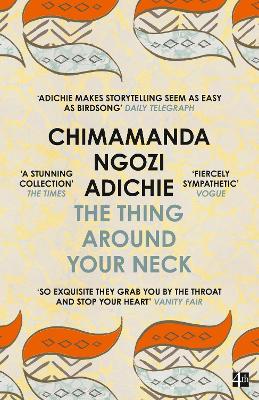 The Thing Around Your Neck

Description - The Thing Around Your Neck by Chimamanda Ngozi Adichie

From the Orange Prize-winning author of 'Half of a Yellow Sun' come twelve dazzling stories that turn a penetrating eye on the ties that bind men and women, parents and children, Nigeria and the West. In 'A Private Experience', a medical student hides from a violent riot with a poor Muslim woman whose dignity and faith force her to confront the realities and fears she's been pushing away.

In 'Tomorrow Is Too Far', a woman unlocks the devastating secret that surrounds her brother's death.

The young mother at the centre of 'Imitation' finds her comfortable life threatened when she learns that her husband back in Lagos has moved his mistress into their home.

And the title story depicts the choking loneliness of a Nigerian girl who moves to an America that turns out to be nothing like the country she expected; though falling in love brings her desires nearly within reach, a death in her homeland forces her to re-examine them.

Searing and profound, suffused with beauty, sorrow and longing, this collection is a resounding confirmation of Chimamanda Ngozi Adichie's prodigious storytelling powers.


Other Editions - The Thing Around Your Neck by Chimamanda Ngozi Adichie 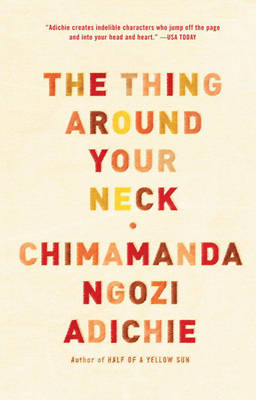 Book Reviews - The Thing Around Your Neck by Chimamanda Ngozi Adichie

» Have you read this book? We'd like to know what you think about it - write a review about Thing Around Your Neck book by Chimamanda Ngozi Adichie and you'll earn 50c in Boomerang Bucks loyalty dollars (you must be a Boomerang Books Account Holder - it's free to sign up and there are great benefits!)

Chimamanda Ngozi Adichie was born in Nigeria in 1977. Her first novel `Purple Hibiscus' was published in 2003 and was longlisted for the Booker Prize. Her second novel `Half of a Yellow Sun' won the 2007 Orange Prize for Fiction. Her short story collection, `The Thing Around Your Neck', was published to critical acclaim in 2009. Her work has been selected by the Commonwealth Broadcasting Association and the BBC Short Story Awards, has appeared in various literary publications, including Zoetrope and The Iowa Review. She won a MacArthur `genius' grant in 2009, and in 2010 appeared on the New Yorker's list of the best 20 writers under 40. Her third novel, `Americanah', was published to widespread critical acclaim in 2013. She lives in Nigeria.

Dear Ijeawele, or a Feminist Manifesto in Fifteen Suggestions
$7.99 $9.99