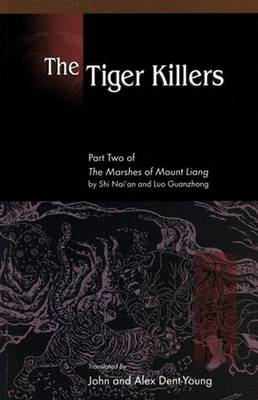 The Tiger Killers is the second volume of a new translation of the Chinese classical novel generally known as ""The Water Margin"". Like the first volume, ""The Broken Seals"", it follows the fortunes of various outlaw heroes as they move through a world of treacherous officials, jealous toadies, bullying gaolers, hired assassins, foolhardy generals and cannibalistic innkeepers. This volume contains some of the most famous scenes in the novel, starting with the episode in which Wu Song gets drunk at the tavern, ascends the pass in late evening and kills a notorious man-eating tiger with his bare hands. His subsequent encounter with his midget brother's flirtatious wife, Jinlian or Golden Lotus, and her vain attempt to seduce him lead into a tale of adultery, callous murder and bloody vengeance. The second half of the book is concerned with Song Jiang's attempts to serve out his prison sentence honorably and avoid becoming an outlaw, until he is unjustly condemned to death for a misconstrued poem. Towards the end of this volume we meet the violent Li Kui, variously known as Iron Ox or Black Whirlwind, who also turns out to have a way with tigers. This volume consists of chapters 23 to 43 of the full 120-chapter version of the novel by Shi Nai'an and Luo Guanzhong. It is the first English translation based on this version.

» Have you read this book? We'd like to know what you think about it - write a review about Tiger Killers book by Nai'an Shi and you'll earn 50c in Boomerang Bucks loyalty dollars (you must be a Boomerang Books Account Holder - it's free to sign up and there are great benefits!)

John Dent-Young has taught in Burma, Sri Lanka, Spain, and Thailand, and at present is lecturer in English at The Chinese University of Hong Kong. Alex Dent-Young works as a translator with Baker and Mckenzie in Hong Kong

A Preview for this title is currently not available.
More Books By Nai'an Shi
View All