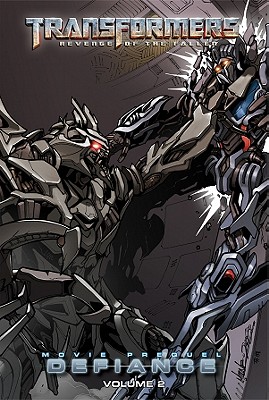 The second official prequel to the summer's "TRANSFORMERS: REVENGE OF THE FALLEN" movie begins here! "DEFIANCE" tells a tale that delves back to the very origins of CYBERTRON and the beginnings of the war between AUTOBOTS and DECEPTICONS. In Vol. 2, CYBERTRON is attacked by an alien race attracted to the energy signature of the ALLSPARK. Their attack on the city of METROTITAN is thwarted by the military and security forces led by MEGATRON, who was severely wounded in battle. Collapsing at the base of an ancient relic discovered at an archaeological site, MEGATRON is close to death. What dark secret is hidden within the relic and how could its discovery lead to the collapse of CYBERTRON? Spotlight editions are printed on high-quality paper and with reinforced library bindings specifically printed for the library market. Grades 2-6.

» Have you read this book? We'd like to know what you think about it - write a review about Transformers: Revenge of the Fallen: Defiance, Volume 2 book by Chris Mowry and you'll earn 50c in Boomerang Bucks loyalty dollars (you must be a Boomerang Books Account Holder - it's free to sign up and there are great benefits!)


A Preview for this title is currently not available.
More Books By Chris Mowry
View All

Transformers Movie Slipcase Collection Volume 2
No Stock on Hand, Supplier Has No Due Date for Supply.
$67.49 $74.99