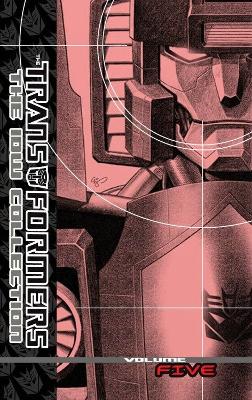 The re-presentation of IDW''s Transformers Universe continues with Volume 5, collecting the entirety of the maxi-series All Hail Megatron issues #1-12 and Coda #1-4.

» Have you read this book? We'd like to know what you think about it - write a review about Transformers The Idw Collection Volume 5 book by Shane McCarthy and you'll earn 50c in Boomerang Bucks loyalty dollars (you must be a Boomerang Books Account Holder - it's free to sign up and there are great benefits!)

Shane McCarthy presently resides in Perth, Western Australia, officially one of the top ten most furtherest away from everywhere places on the planet. Shane is a freelance writer whose work has been published internationally by DC Comics, Marvel Comics, and IDW to name a few. Over the years he has written Batman: Legends of the Dark Knight, Detective Comics (starring Batman), Dark X-Men, Daredevil, Star Wars, and Transformers: All Hail Megatron. When not delving into the topsy turvy world of comics, Shane (also a professional dancer) can be found teaching and dancing the "Lindy Hop" all around the world. Nick Roche is an Irish comic book artist and writer who hails from Dublin. He's best known for his extensive credits on IDW's Transformers titles, the most prominent of which are Transformers: Sins of the Wreckers, Transformers: Last Stand of the Wreckers, and numerous covers for Transformers: More Than Meets the Eye, to which he also contributed stories and interior art. Nick has also worked on IDW's Doctor Who series and the creator-owned, all-ages horror comedy Monster Motors, with Minions screenwriter Brian Lynch. Beyond IDW, he's worked on New Warriors for Marvel and serves as the album artist and music video designer for rock band The Darkness.