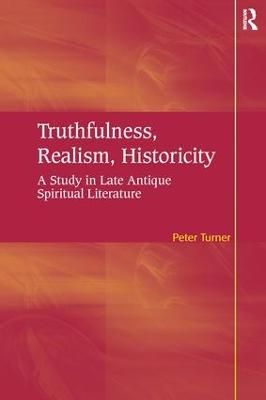 Were holy men historical figures or figments of the theological imagination? Did the biographies devoted to them reflect facts or only the ideological commitments of their authors? For decades, scholars of late antiquity have wrestled with these questions when analysing such issues as the Christianization of Europe, the decline of paganism, and the 'rise of the holy man' and of the hagiographical genre. In this book Peter Turner suggests a new approach to these problems through an examination of a wide range of spiritual narrative texts from the third to the sixth centuries A.D.: pagan philosophical biographies, Greek and Latin Christian saints' lives, and autobiographical works by authors such as Julian and Augustine. Rather than scrutinizing these works for either historical facts or religious and intellectual attitudes, he argues that a deeper historicity can be found only in the interplay between these types of information. On the textual level, this analysis recognises the genuine commitment of spiritual authors to write truthfully and to record realistically a world felt to be replete with spiritual and symbolic meaning. On the historical level, it argues that holy men, expecting the same symbolism within their own lives, adopted lifestyles which ultimately provoked and confirmed this world view. Such praxis is detectable not only in the holy men who inspired biography but also in the period's scattered autobiographical writings. As much a historical as a textual phenomenon, this spiritually-minded scrutiny of the world created interpretations which were always open and contested. Therefore, this book also associates spiritual narrative texts with only one possible voice of religious experience in a constant dialogue between believers, opponents, and the sceptical undecided.

» Have you read this book? We'd like to know what you think about it - write a review about Truthfulness, Realism, Historicity: A Study in Late Antique Spiritual Literature book by Peter Turner and you'll earn 50c in Boomerang Bucks loyalty dollars (you must be a Boomerang Books Account Holder - it's free to sign up and there are great benefits!)


A Preview for this title is currently not available.
More Books By Peter Turner
View All