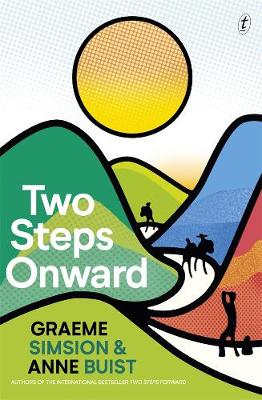 Three years after life got in the way of their long-distance relationship, Californian artist Zoe and English engineer Martin have an unexpected opportunity to reunite- a second chance to follow in the footsteps of pilgrims in Europe.

This time, they won't be walking the famous Camino de Santiago to north-west Spain but the less-travelled Chemin d'Assise and Via Francigena to Rome, along the mountainous paths from rural France.

And rather than each setting off solo, they will accompany Zoe's old friend Camille-who, despite her life-threatening illness, insists she will walk the whole sixteen hundred kilometres to seek an audience with the Pope-and her not-so-ex-husband, Gilbert, who sees the trip as a gourmet tour.

Then Bernhard, Martin's young nemesis from the previous trek, shows up, along with Martin's daughter, Sarah, who is having a quarter-life crisis and doesn't exactly hit it off with Zoe...

Two Steps Onward is the wise, witty and wine-filled follow-up to Two Steps Forward, Graeme Simsion and Anne Buist's bestselling novel about walking the Camino. it's about helping the people you love, and knowing when to let go. Figuring out what you really want in life. And seizing your chances, before it's too late.

» Have you read this book? We'd like to know what you think about it - write a review about Two Steps Onward book by Graeme Simsion and you'll earn 50c in Boomerang Bucks loyalty dollars (you must be a Boomerang Books Account Holder - it's free to sign up and there are great benefits!)

5 stars Two Steps Onward is the follow-up to Two Steps Forward, by Australian husband and wife author team, Graeme Simsion and Anne Buist. It only takes one email. Zoe Witt drops what she is doing and heads to France. Her best friend since college, Camille Morvan is making a pilgrimage from Cluny to Rome, for a papal audience, via the Chemin d’Assise and Via Francigena to Rome. Diagnosed with a debilitating, ultimately terminal illness, does she seek a miracle? Gilbert, her now reconciled ex, is determined to get her there.

It’s over three years since Zoe walked the Camino de Santiago, but she has no hesitation in joining Camille, with whom she shares a significant life experience. She tries to enlist Martin Eden, the engineer who used his Camino to test his cart design, and simultaneously stole Zoe’s heart, for two reasons: his cart could be useful for Camille’s trek; and they might discover if their decision to abandon their long-distance love affair was the right one. Or not.

As tempting as walking (and perhaps more?) with Zoe is, Martin can’t, with any conscience, ditch his three-week commitment to Sarah, his twenty-year-old daughter, so he rejects the idea. But for Sarah, a med student frustrated with her course, nothing is set in stone and, mere days later, she and Martin are at Camille’s house in Cluny, ready to join the Chemin for three weeks of her Uni vacation. Zoe’s welcome to Martin is unambiguous.

The only fly in Martin’s ointment is the presence of Bernhard Muller, the German engineering student, who is delivering to Camille his modified version of Martin’s cart, the ”better” design. Neither cart ends up being required on the trip, but Bernhard, with his own Camino expertise, swells their pilgrim party to six.

A true pilgrim seeking to atone for some major past sins, Camille points out that, while all pledge their support, the group’s motivations differ: a former wine merchant, Gilbert won’t forgo the opportunity to taste fine wines and foods on the journey; Martin hopes to rekindle his relationship with Zoe, something she quickly accepts; Sarah and Bernhard are drawn by adventure.

Having walked most of her Camino alone, Zoe finds that spending eleven weeks in close company with five others is quite a different prospect. As the group walks, they gradually settle into routines, facing challenges that are not limited to the terrain and physical fitness (or lack thereof), but include friction between some of them, mismatched expectations regarding accommodation, food and drink, and the cognitive manifestations of Camille’s illness.

Bernhard summarises their developing cooperation thus: “Teams are not easy: there are predictable stages. First we form—Camille has the concept of the walk; Gilbert recruits Zoe; Zoe brings me and Martin, who brings Sarah. Then we norm—get to know each other, our strengths and limitations. ’‘And then we storm, right?’ Martin interjected. ‘We blow hard in different directions.’ Martin laughed. Which was nice, because I was expecting him to put Bernhard down. ‘And now,’ said Bernhard, ‘we are beginning to perform.’”

The narrative alternates between Martin and Zoe, and the male and female voices are well rendered; their different perspectives on the members of their party, their character and behaviour is interesting. Having walked themselves, the authors’ depiction of the Chemin experience is authentic and their characters have depth and appeal. There are some surprises in the plot, and in the sources of wise words and insightful observations. Readers will definitely appreciate the maps. This is both a thought-provoking and heart-warming read. This unbiased review is from an uncorrected proof copy provided by NetGalley and Text Publishing.


A Preview for this title is currently not available.
More Books By Graeme Simsion
View All