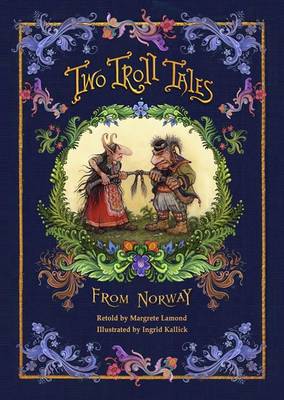 Retold in lively and authentic style by Norwegian-Australian author Margrete Lamond, and sumptuously illustrated by Norwegian-American illustrator Ingrid Kallick, these stories of magic and mischief from Norway will enthral young readers. Margrete Lamond is a consummate storyteller with a deep understanding of fairy tales and folk tales. Her books include Tatterhood and Other Feisty Folktales, illustrated by Peter Sheehan, The Nutcracker, illustrated by Ritva Voutila; Frankenstein, illustrated by Drahos Zac; and the Once Upon A Timeless Tale series, a collection of retold folk and fairy tales, illustrated by a variety of leading Australian and international artists. Award-winning illustrator Ingrid Kallick's work has been featured in magazines and books, including in the Once Upon A Christmas anthology (Christmas Press 2014). Her work was selected for the Society of Illustrators Los Angeles shows in 2013 and 2015, with a bronze medal in 2015. Her magazine covers won the SCBWI Magazine Merit Award in 2012 and 2015, while her selection for the SCBWI stand at the Bologna Book Fair in 2014 received an honourable mention. Two Troll Tales from Norway is her first picture book.

» Have you read this book? We'd like to know what you think about it - write a review about Two Troll Tales from Norway book by Margrete Lamond and you'll earn 50c in Boomerang Bucks loyalty dollars (you must be a Boomerang Books Account Holder - it's free to sign up and there are great benefits!)


A Preview for this title is currently not available.
More Books By Margrete Lamond
View All