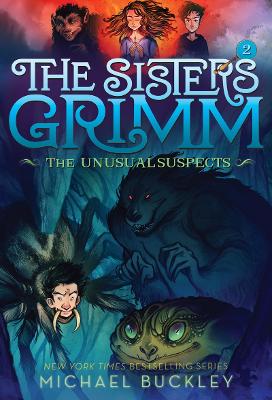 The Unusual Suspects (The Sisters Grimm #2)

Description - The Unusual Suspects (The Sisters Grimm #2) by Michael Buckley

Fans of fractured fairy tales will be delighted to discover the fantasy, mystery, adventure, and humor in the beloved New York Times bestselling Sisters Grimm series by Michael Buckley, now with new cover art. As featured on NBC's The Today Show, the nine wildly popular books are favorites around the world. They were among the first books to bring a distinctly girl-power spin to fairy tales - a spin taken up by hit movies and shows TV such as Once Upon a Time, Grimm, and Maleficent, the bestselling book series The Land of Stories, and other. New covers will appear on book one, The Sisters Grimm: The Fairy-Tale Detectives; book two, The Sisters Grimm: The Unusual Suspects; and book three, The Sisters Grimm: The Problem Child. Books four through nine will be available in revised editions soon. ?

In this second book in the bestselling Sisters Grimm series, the sisters begin school at Ferryport Landing Elementary. Daphne gets Snow White for a teacher, but Sabrina is stuck with nasty Mr. Grumpner and a class of mildly psychotic sixth graders. When Mr. Grumpner is mysteriously murdered, Daphne and Sabrina must discover which Everafter is responsible. But Sabrina's distrust of all Everafters may get in the way of unraveling the case.

With an irresistible combination of adventure and imagination, the Sisters Grimm series injects classic fairy tales with modern day sensibilities and suspense, creating a fantastical combination readers of all ages will love.

"Kids will love Sabrina and Daphne's adventures as much as I did."
- Sarah Michelle Gellar, star of Buffy the Vampire Slayer and I Know What You Did Last Summer

"Why didn't I think of The Sisters Grimm? What a great concept!" - Jane Yolen, award-winning author

"An idea that will make other children's book writers, and tons of aspiring ones, kick themselves for not thinking of it first." - The San Antonio Express-News

"A page-turner that incorporates humor, tension, suspense and a wild cast of characters, readers will have trouble putting this novel down." - The Dallas Morning News

"The twists and turns of the plot, the clever humor, and the behind-the-scenes glimpses of Everafters we think we know, will appeal to many readers." - Kliatt, starred review

» Have you read this book? We'd like to know what you think about it - write a review about Unusual Suspects (The Sisters Grimm #2) book by Michael Buckley and you'll earn 50c in Boomerang Bucks loyalty dollars (you must be a Boomerang Books Account Holder - it's free to sign up and there are great benefits!)