Description - The Waterhole by Graeme Base

Down to the secret waterhole the animals all come,
As seasons bring forth drought and flood, they gather there as one.
United in their common need, their numbers swell to ten,
But hidden deep amongst the trees lie ten times that again!
The Waterhole is an ingenious fusion of counting book, puzzle book, storybook and art book - an exhilarating journey of discovery, from the plains of Africa and the Jungles of the Amazon to the woodlands of North America and the deserts of outback Australia.
Visit graemebase.com

Buy The Waterhole by Graeme Base from Australia's Online Independent Bookstore, Boomerang Books.

Other Editions - The Waterhole by Graeme Base 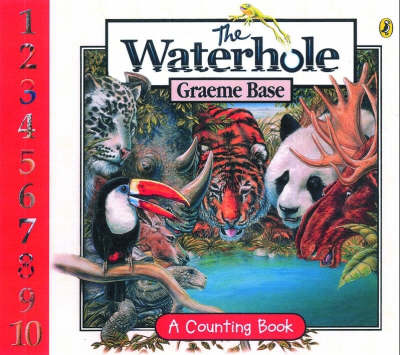 Book Reviews - The Waterhole by Graeme Base

» Have you read this book? We'd like to know what you think about it - write a review about Waterhole book by Graeme Base and you'll earn 50c in Boomerang Bucks loyalty dollars (you must be a Boomerang Books Account Holder - it's free to sign up and there are great benefits!)

Graeme Base is one of the world's leading creators of picture books. His alphabet book Animalia, received international acclaim when it was first published in 1986, and has achieved classic status with worldwide sales approaching three million copies. It has now inspired an animated TV series. Other favourites by Graeme Base include The Eleventh Hour, My Grandma Lived in Gooligulch, The Sign of the Seahorse, The Discovery of Dragons, The Worst Band in the Universe,The Waterhole (and The Waterhole Board Book), Jungle Drums and Uno's Garden. In 2007 this last title featured in six major awards and was winner of three- Speech Pathology Book of the Year, younger readers; The Green Earth Book, USA; The Wilderness Society Environment Award. In 2003, his first novel for young readers, TruckDogs, was released. It was short-listed for the Children's Book Council of Australia Book of the Year Awards the following year. In 2009 Graeme produced the the fascinating, beautiful and challenging book Enigma; can you crack the code? Graeme's most recent book is The Last King of Angkor Wat. Graeme lives in Melbourne with his artist wife, Robyn, and their three children - James, Kate and Will. Visit graemebase.com

The Unlikely Story of Bennelong and Phillip
Michael Sedunary
$16.99 $19.99