When She Was Good

Description - When She Was Good by Michael Robotham

He thinks the truth will set her free. She knows it will kill them. A heart-stopping psychological thriller from the Number One bestselling author of THE SECRETS SHE KEEPS and THE OTHER WIFEShe has secrets.Six years ago, Evie Cormac was found hiding in a secret room in the aftermath of a brutal murder. But nobody has ever discovered her real name or where she came from, because everybody who tries ends up dead.He needs answers.Forensic psychologist Cyrus Haven believes the truth will set Evie free. Ignoring her warnings, he begins to dig into her past, only to disturb a hornet's nest of corrupt and powerful people, who have been waiting to find Evie - the final witness they have been searching for. Unbeknownst to him, Cyrus is leading them straight to Evie. The truth will not set her free. It will get them killed.From Australia's foremost crime writer, Michael Robotham, this is the second explosive novel featuring gifted criminal psychologist Cyrus Haven following the Edgar-award nominated GOOD GIRL, BAD GIRL.Praise for WHEN SHE WAS GOOD:'A heart-stopping psychological thriller' - Herald Sun'Don't try to get anything else done; just keep reading. The only way this book will let you go is if you walk, or run, with Evie, Cyrus and Sacha to the last page' - New York Journal of Books'An urgent, poignant, and terrifying thriller ... Readers will be putty in this supremely talented author's capable hands' - Kirkus Reviews'As darkly beautiful as a crime novel can be' - Australian Crime Fiction

Buy When She Was Good by Michael Robotham from Australia's Online Independent Bookstore, Boomerang Books.

Other Editions - When She Was Good by Michael Robotham 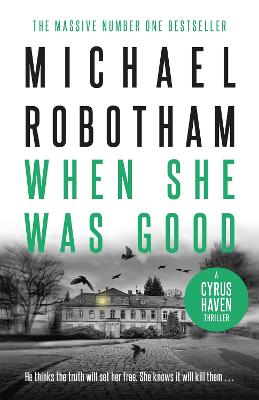 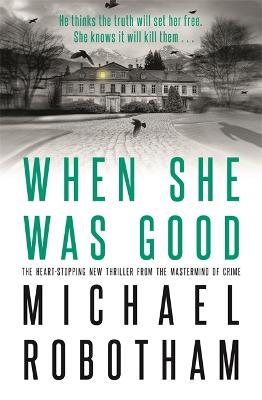 Book Reviews - When She Was Good by Michael Robotham

» Have you read this book? We'd like to know what you think about it - write a review about When She Was Good book by Michael Robotham and you'll earn 50c in Boomerang Bucks loyalty dollars (you must be a Boomerang Books Account Holder - it's free to sign up and there are great benefits!)

Book Review: When She Was Good by Michael Robotham - Reviewed by CloggieA (09 Jun 2020)

5 stars “People think they want the truth, but the opposite is true. Honesty is mean and rough and ugly, while lying can be kinder, softer and more humane. It’s not honesty that we want, but consideration and respect.”

When She Was Good s the second book in the Cyrus Haven series by award-winning Australian author, Michael Robotham. Initially, it looks like retired Detective Superintendent Hamish Whitmore has committed suicide. But that’s not what forensic psychologist, Cyrus Haven sees when he examines the scene. It quickly becomes clear that Hamish was murdered, and that it is related to the old (closed) case he couldn’t let go. What disturbs Cyrus most is the tiny notation in a corner of Hamish’s case whiteboard: Angelface, London, 2013.

Evie Cormac is back at Langford Hall, a secure children’s home, impatiently waiting to be deemed old enough to be released. But not everyone agrees that she’s ready. Meanwhile, she endures, hanging out for visits from Cyrus, and more importantly, their Labrador, Poppy. But Cyrus has been picking at the past, hoping to find out more about what Evie refuses to reveal; have his subtle enquiries tripped a wire that will put them all in danger?

For all those readers who wondered just how Evie ended up behind the wall in that house where the tortured corpse was found, this instalment of Cyrus Haven eventually explains all that, and a lot more! Evie doesn’t trust anyone, and maybe Cyrus would do well to take a leaf out of her book. As he meticulously follows up leads, it’s like he’s pulled a tiger’s tail. This novel is filled with edge of the seat, heart thumping action. And the final chapter, oh boy! Another brilliant read! This unbiased review is from an uncorrected proof copy provided by NetGalley and Hachette Australia.

Phosphorescence: On awe, wonder and things that sustain you when the world goes dark
Julia Baird
$26.39 $32.99
More Books By Michael Robotham
View All