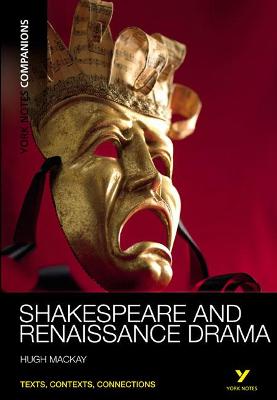 The York Notes Companion to Shakespeare and Renaissance Drama brings widely studied plays such as Hamlet, Othello and Dr Faustus to life for students, by considering them from the perspective of contemporary theatre-goers. Placing Shakespeare's masterpieces in the social and historical contexts of the period and examining them alongside the work of his lesser known contemporaries, the Companion provides detailed commentaries on a range of plays, and guides students through key literary theories and debates. Connecting texts with their scholarly and historical contexts, this is essential reading for any student of Renaissance drama.

» Have you read this book? We'd like to know what you think about it - write a review about York Notes Companions: Shakespeare and Renaissance Drama book by Hugh Mackay and you'll earn 50c in Boomerang Bucks loyalty dollars (you must be a Boomerang Books Account Holder - it's free to sign up and there are great benefits!)

Dr Hugh Mackay completed his Phd on early Jacobean drama in 2003 at the University of Southampton, under the supervision of Professor Kathleen McLuskie, Director of the Shakespeare Institute. From 2002 to 2007 he taught various undergraduate courses at Southampton, ranging from 'Literature and History', 'Shakespeare's Histories and Comedies' to 'Critical History' and 'Marxism and Psychoanalysis'. He has a paper on 'Lust's Dominion and the Readmission of the Jews', published in the Review of English Studies, and has co-organised and presented at several conferences.

A Preview for this title is currently not available.
More Books By Hugh Mackay
View All

Right and Wrong: How to decide for yourself, make wiser moral choices and build a better society
$16.79 $19.99